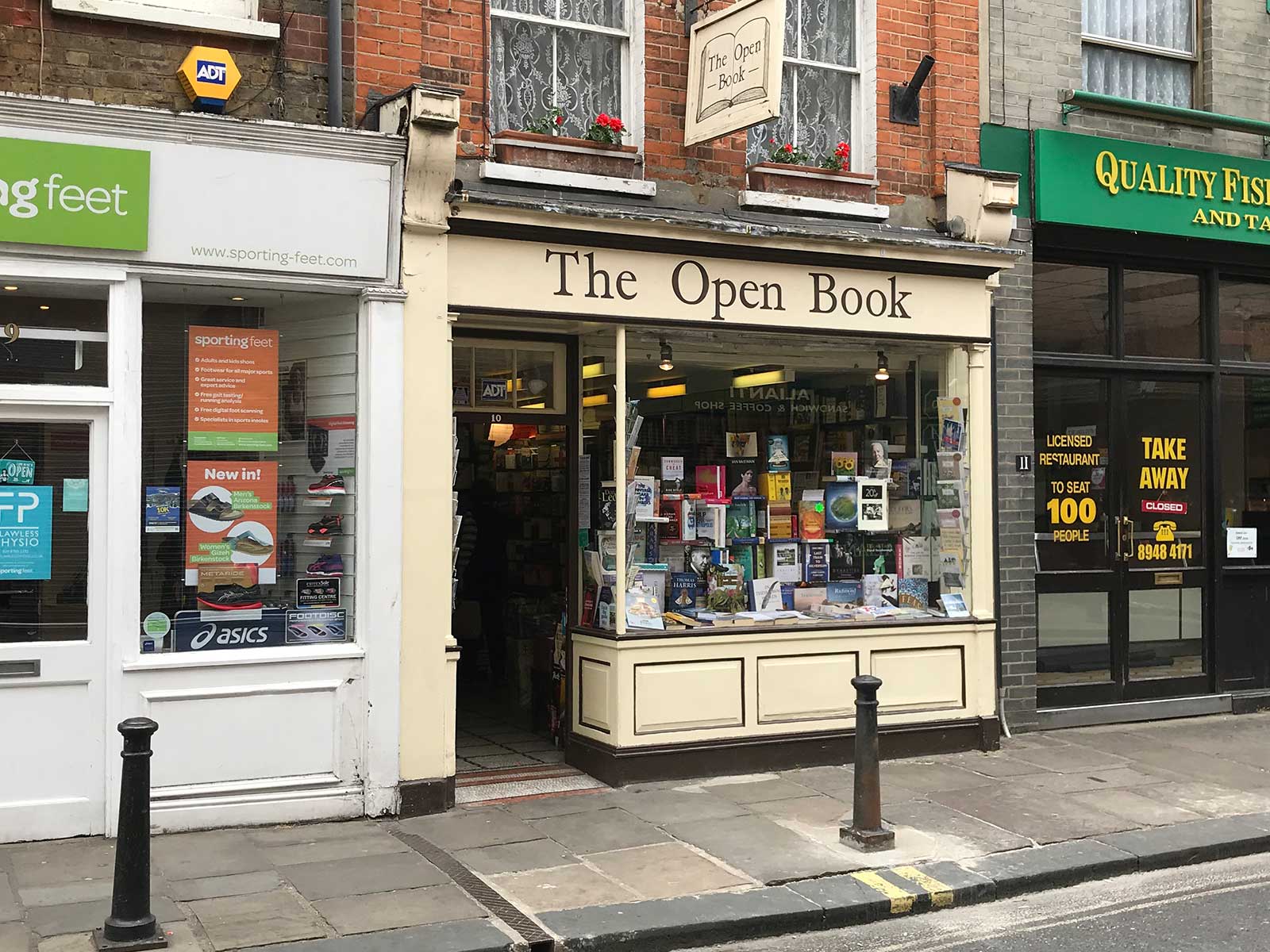 I unapologetically declare this a personal favourite.

The shop itself was built back in rock star days by local inhabitant Pete Townsend, who named it ‘The Magic Bus,’ extending it (badly) and then selling it when his interests moved elsewhere. It was then run by Helena for 35 years as a more literary bookshop, and is currently headed by Madeleine and Kirsten, whose humour and enthusiasm for good books kept me there for an hour longer than I intended with their anecdotes and, what we might have called before its appropriation by the politically incorrect, banter. There were suggestions for reading when I pushed – ‘Educated’ – Tara Westover and ‘Silence of the Girls’ – Pat Barker were two I noted down. ‘The Diary of a Bookseller’ (2017) by Shaun Bythell was identified as something specifically for me. They were right.
The Open Book seems like a tiny breadshop or children’s sweet seller when you look from a distance, but, tardis-like, its innards suck you in to glorious displays of different titles and subject areas, idiosyncratically grouped in ways that have you as interested in the shop philosophy as its books.
The Open Book has an unapologetically clunky webpage address and marginally off the track twitter account – @the openbook2 (@theopenbook is owned by someone with one follower who follows no one, a twitter account for writing books – none as yet written or ready to be discussed, it would appear). They’re clearly not bothered about slick marketing, and it doesn’t seem to have mattered as work of mouth and the frequenting of locals has clearly made this one of the most popular bookshops in South West London. They will find and order practically any book you’re after, also offering crazy cards, postcards and funky gift wrapping paper. A bare stone’s throw from the sober stationery smells of W.H.Smiths, this is like a date with Grace Slick after an afternoon perambulation with Teresa May.
In 2012 Michael Frayn declared The Open Book his favourite bookshop, and every so often David Attenborough (at the original request of his brother Richard) pops in for an hour to have a chat, a look round and to sign any books of his on display. These wouldn’t in any case be books that stay unsold on the shelves for very long, but now when locals get them home and find them signed by the author, that’s rather a lovely surprise, I would think, especially if they are bought as presents for relatives or friends.
Local events are regular – as an Independent Bookshop, they were offered an extract from the new book by Robert Macfarlane; Underland and hosted a ‘Boozy Bookclub’ on the 31st of May to celebrate the occasion. I unfortunately just missed out on that. They declared themselves supportive of local writers, evidenced by the corner of the shop sporting self-published tomes and local stroll and photographic books. I scribbled titles furiously onto the nearest scrap of paper I could grab. Writers, book clubs, literary lunches, evening events (some in Oxford) and a ‘two writers discuss’ workshop in Roehampton on ‘Winston Churchill’ featuring Tim Battle and Paul Crowe. Simon Pegg and Nick Frost were also said to be local customers, often on the lookout for ideas for a new film – I made a hopeful note that we might explore this possible route for a couple of our titles…
Kirsten was the first of the two people I met in the shop. She had been a Head of English in Brighton but had become disillusioned with the way the art of teaching has been reduced to annual tests and targets. She had decided a little career change might be worth considering, and, it seems hasn’t looked back since coming to ‘The Open Book.’ I asked how they survived in a tough business world, and they agreed that it was the combination of not being part of a chain and having the most extraordinary generous and loyal local customers – in every sense. Every day in the shop offers something different, something unexpected. I said it sounded a bit like teaching used to be back in the 1980s and early 1990s. So maybe not quite a career change, more a case of following your heart to a place where you are valued and that can make the most of your talents.
Madeleine was the second person there – an informative and entertaining mine of local information, taking me to corners of the shop that offered all sorts of local information to be found in fiction where you might not know to look for it. She found paragraphs from books that referenced this part of the world – especially Brentford – and her encyclopaedic knowledge seemed heaven sent for such a place. I can see I have made a note to visit a local place in Brentford called ‘The Snail Sanctuary’. I have put a red asterisk which is shorthand for ‘do this’. Not a moment you’d imagine possible on a visit to a local bookshop, but then this is the Open Book – if you haven’t been there yet – it’s time to go.